Bob Perry is our Corpus Callosum

Bob Perry is our Corpus Callosum 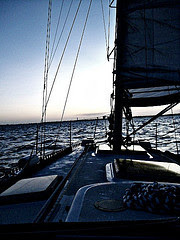 A friend asked me how Mark and I came to an agreement on a boat when we are so very divergent in our tastes and personalities. Here in lies the story.

Our relationship works because we balance each other. Mark is the quintessential Left Brain. An engineer by trade and by personality, Mark is analytical and obsessed with order, performance, suitability for the job at hand (be it a boat or a tool), tidiness, symmetry and form. Me? I'm the epitome of a Right Brain. Creative, a bit chaotic, with a big imagination and a deep love of beauty be it audio or visual. That's why I slogged away all those years with music as my profession.

As we began our search, we did this the way that we do everything. I started researching, then started looking and if I found something I thought would work then we would bring out Mark. I think there were many brokers who were put off by the fact that it was just me doing the initial viewing. No, I am not going to bring "my hubby" out to tire kick. I know what boats would possibly work for him, no sense wasting his time on ones that won't meet his criteria. I looked at many boats. Many, many boats Morgans, Babas, Irwins, Gulf Stars, Tayanas, Beneteaus, Isalnd Packets, Catalinas, Cabo Ricos, Passports, Jeanneaus, etc, etc.

At this point I knew nothing about designers, just features that were a must. While Mark loved big open cockpits, this was a no go for me. My overactive imagination/ chicken baby tendencies would kick in and I could imagine 100 different scenarios where in we were all swept overboard from that big open cockpit. Mark loves the lines of the newer European boats. I imagined hull slapping making me go insane and me taking everyone with me. I like the charm of more traditionally styled boats, Mark doesn't care for charm, he's the sailor and he wants a boat that sails well. I want a boat that makes me feel safe because I am not the sailor in the family. I am a willing crew member, but I wouldn't call myself a sailor- yet.

The first boat that really made me pay attention after 2 boats failed survey and sea trial was a Passport 40. It met Mark's criteria for beautiful lines, reputation for sailing well , logical use of cabin space and deck layout. I liked it because the cabin felt like a home and the cockpit seemed "safe". Alas, this particular boat was not in good enough condition to even warrant further investigation but I did note the designer listed on the paperwork for the first time- Robert Perry.
*photo above is a sister ship and was not taken by me. Notice how similar her lines are to Ceol Mor.

The next boat that I was interested in, I deemed to be too small for our family but once again it met the joint criteria of both Mark and I , the Tayana 37. Beautiful, logical and that important quality to me- it made me feel safe. It wasn't a fit for us at this time but hey, there's that name again. Robert Perry.

We looked at a few more boats. Ok, we looked a a LOT more boats. One of the brokers mentioned that he had a boat I might be interested in and would I come take a look?

Before we made a formal offer, we did a bit of research. Where was she made? What type of steel was used to make her- Chinese or US? What was the hull speed? Sail plan? Displacement? Tankage? How many of these boats are out there? What are the owners doing with their boats? And finally, who designed this boat? The answer to that last question - Bob Perry.

We didn't become fans of Bob Perry because we read that more of his boats have circumnavigated the globe than any other modern designer. We weren't swayed by his many awards or his accomplishments. We became fans of his work because of the work itself. Work that we saw first hand through neophyte eyes and which captured us both, for very different reasons. I think this is what all artists hope for, for their work to be appreciated for itself. 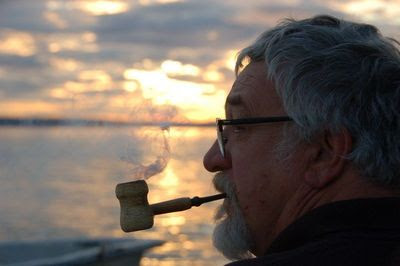 * Photo from www.perryboat.com
After living with Ceol Mor for a bit, I looked up some information on Bob Perry. It turns out that he not only studied engineering and naval architecture but he is a musician as well.(ok, he's a bass player but we will give him credit

) If Mark is the left brain of this relationship and I am the right brain then Bob Perry is our corpus callosum. Thanks Bob. You've managed to design a boat that makes us both happy.
Posted by The Ceol Mors at 8:21 AM 3 comments:

We've run into some debate over what is the best type of marine grade plywood with which to rebuild the chain plate bulkheads. Mark of course, went into "Mark mode" and decided to begin extensive testing of the different types of plywood available. He felt we needed to test for compression and rot amongst other things. This meant we had to have a sampling of different plys on hand in order to get going. This shouldn't be a problem as the local chandlery had some 4x8 sheets in stock.

Ah HA! Here we run into a bit of difficulty due to Mark and his Markness. Mark is the reason that the Scots have a reputation as being frugal. Mark would rather have bamboo shoots shoved underneath his fingernails than to waste money. Imagine his distress to find that having the oversized sheets of ply delivered would cost more than the wood itself. Having a small car means that they could not be transported by car. Hmm...

Mark has an uncanny ability to figure out the lowest cost solution to every difficulty. If everyone has a superhero power, this would be one of his (the other is that he can fix anything and make it better than it was in the first place. seriously). I was out of town with the kids, so I did not get to see the looks on peoples faces as he loaded the plywood at the shop then brought it home without having to pay anyone or to scratch up his car by placing it on the roof. I did however, convice him to grab a photo of it for my amusement. Hopefully, it amuses you as well.
Behold- the low cost plywood transportation solution! 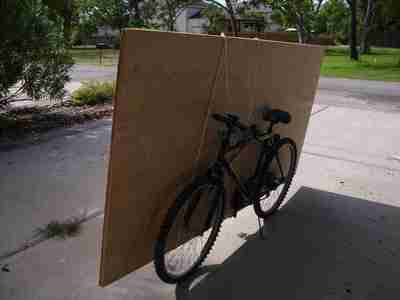 Posted by The Ceol Mors at 8:25 AM No comments: