I like blog posts that neatly wrap up a topic into a tidy little page. I am not a fan of the "to be continued" type of storytelling. This is the reason you've not heard much lately, because the big project right now is still dragging on and on and on. Our generator is generating some serious headaches.

Our generator probably dates back to the original commissioning of Ceol Mor, most likely sometime in early 1985. Due to the fact that Ceol Mor was largely a dock queen, there are only 1200 hours on it. A well cared for diesel engine will probably outlive most people, so we thought rectifying the fact that we were dealing with sooty exhaust would probably be fairly quick and painless.

Yeah. After almost 3 years of refitting we are either eternal optimists or just really naive. Suffice it to say, that there has been a whole lot of us Cha Cha-ing with the generator. 2 steps forward, 3 steps back and not a whole heck of a lot of progress. It's annoying both Mark and I so much that I am not even going to get into all the dance steps we have taken thus far but will save it until the project comes to a conclusion. Then we will not only have a functional generator but a neatly wrapped up, tidy blog post as well. It will be like freaking Christmas.

Rather than get schmoopy about what hasn't gone right, I'm going to happily blather on about a project that has gone right. Ceol Mor now has the ability to be hooked up to a dock water hose and wonder of wonders, to have dockside water at the flick of a tap.

Mark plumbed it all in, cut into the coaming (cutting any holes in the boat always freaks me out. Even ones well above the water line) and installed an outlet, plumbed some more and voila! WATER!!!

The naysayer in me would point out that we are unlikely to be tied to many docks while out on our cruise but its a function that was missing and since we are tackling the plumbing, might as well get it done. Lest you think it was all a perfect project, there were a couple of fittings that had to be removed, replaced and adjusted to rectify some leakage but all in all, a fairly straight forward project. Thank you Universe, for balancing out the stupid generator.

September has come and passed and while work on the boat has been slow, the kid project has been zipping along at a blistering pace. I am just now starting to get a handle on our school year schedule and I have to say that I am really looking forward to homeschooling as it will be easier on me.

Maura's schedule literally has me ferrying her to activities every week day. She is really throwing herself into making the most of what should be her last year of public school. And while I love her enthusiasm, this would be much, much easier if she could drive herself. It's hard to complain because for the most part, she is just becoming a really helpful and grateful person so I just shut up and drive.

Kitty has started preschool. She is going 2 days a week and she absolutely adores it. Even though this means that the 2 days following school consists of her being totally and completely exhausted, its all worth it when she pipes up "I have school today! I LOVE SCHOOL!". So it makes for a bit of a challenge trying to adjust to the new schedule but its totally worth it.

Speaking of Kitty, can I just say how much fun a 3 year old is? To be sure, they are probably the most challenging age but she is just so darned fun it all balances out. Today, Kitty was deliriously happy because it actually rained. We've been in a drought for so long I think she thought rain was something that only happened in the movies. Today, it rained and she had her zebra boots to wear in the puddles, an umbrella to shelter her as she walked around saying "Tut tut! It looks like rain" while wearing her Supergirl dress. Kitty likes to dress for an event EVERY day but this Supergirl dress is currently her most favorite thing ever. She insists on wearing it every.single. day. 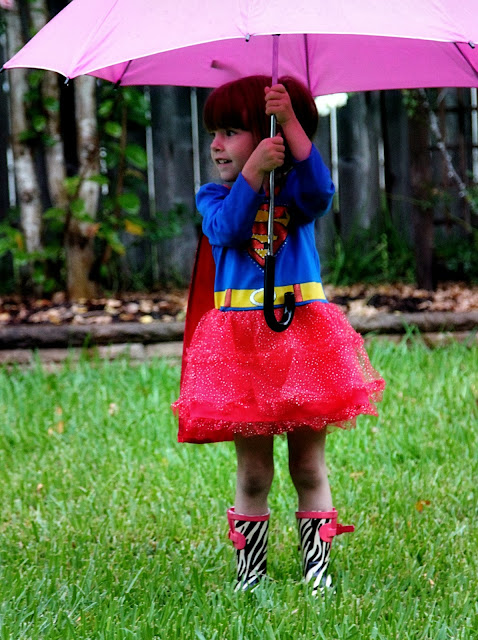 No matter how manky it gets ( I have to sneak it into the wash) it will always make me happy that she believes that when she puts her Super Kitty dress on every morning, it means she is going to work. To save the world. 3 year olds rock. 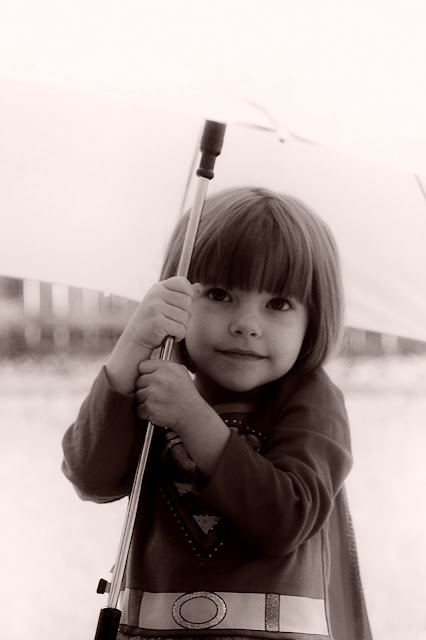 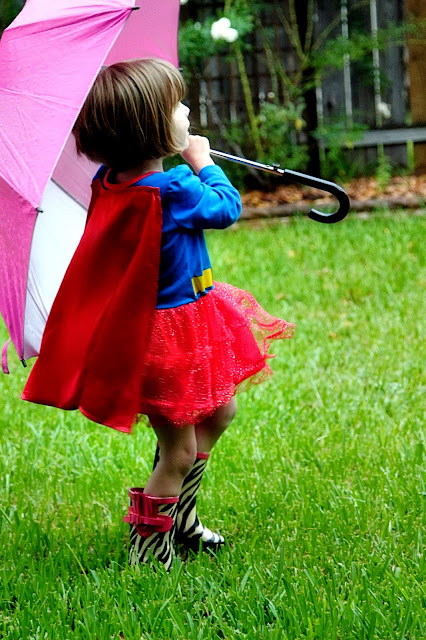