No time to be schmoopy- ITS CHRISTMAS!!

I have not been neglecting the blog. I do try to keep is somewhat focused on the boat (with a healthy bit of kid thrown in. Hey, the title is OUR life and right now our life is pretty darned kidcentric) and there had not been a whole heck of a lot of progress on the boat this month. We aren't slacking, far from it but the truth of the situation is that when Mark is away, precious little ground is gained. If we thought October and November were busily pulling us away from the boat with work, December taught us that we didn't really KNOW what busy was.

December found Mark traveling for work to Florida for a week. No time for fun and sun, he flew back home for a less than 24 hour stay. Bright and early the next morning, he was on a flight to Bergen, Norway. He was so frazzled by the quick flight turn around, he forgot to bring his coat. Mark joyfully embracing the stereotype of the thrifty Scot refused to buy a new coat when he had a perfectly suitable in his car. In Houston. So he bravely kept up a crazy weeks work schedule in Bergen, Norway in December. With no coat. Dude. I appreciate not wasting money as much as the next guy bit getting frostbite will definitely slow your roll.

Anyway, he was able to fly to Scotland to visit with his mother, sister and brother in law for you guessed it- one day. Then it was off to Nuremberg, Germany for a week. While he worked long days, he did find time to enjoy the Christmas markets. His take is that there is no place on Earth that does Christmas better than the Germans and we have put Christmas in Germany on our bucket list. Wouldn't a photo be nice? Yeah. He never takes his camera with him. Its on the nav desk on the boat, far from any image you might want to capture. From Germany, it was back to Norway but this time he was in Stavanger. His time in Norway has put another post cruise option on our list of possible locations. He just loves it there. I never thought much about living in Norway. but it would be kind of neat to see where my mom's family is from and we do have friends there so who knows?

From Stavanger, it was fly home to Houston. Hang your hat for a couple of hours then back to Florida for a few days. And that my friends was all of December. The bad news is that Oct., Nov. and Dec. have managed to push our schedule back by 3 months so there is the very real possibility that our departure date will have to move. The good news is that Mark doesn't so these kinds of work heavy months for the fun of it- they pay him. So bad news, schedule off, good news more pennies in the cruising kitty. I am not going to be schmoopy about yet another possible delay because he is home, we are together and IT IS CHRISTMAS!!! 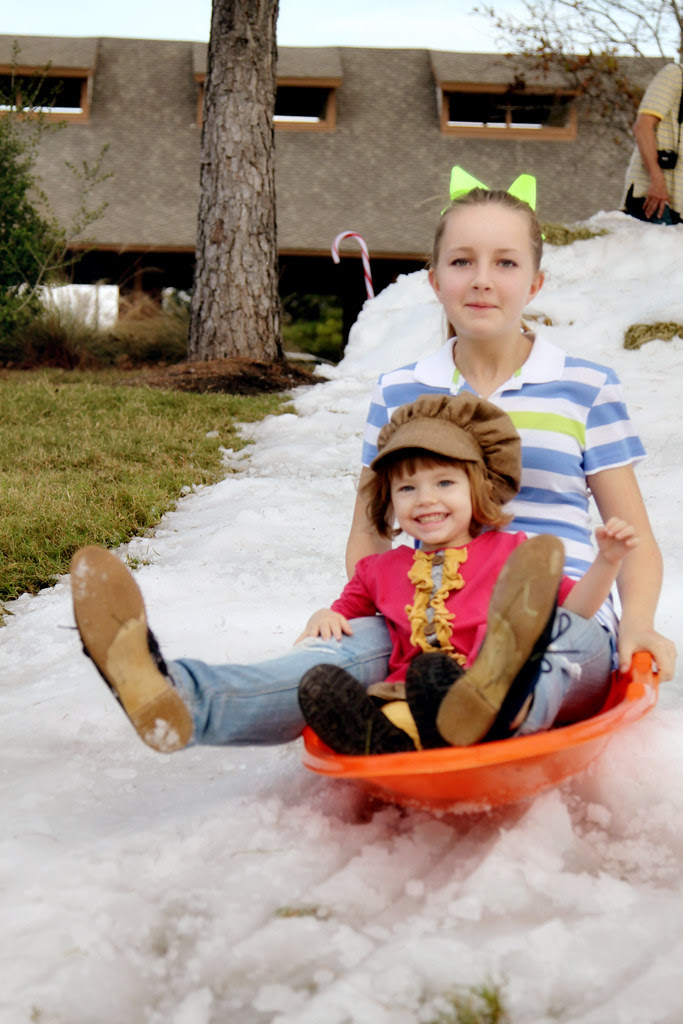 I unabashedly adore Christmas. Its not as if I undergo a complete personality transplant and suddenly become a cookie baking, light installing Martha Stewart type who creates wintry tablescapes out of twigs, marshmallow forest creatures and snow I created in my freezer but I appreciate the handiwork of all those who do. This is shaping up to be a great Christmas and the biggest single reason for this is having a 2 year old who is every bit as excited when she sees light displays and decorated trees as I do. Kitty is a fellow fan of Christmas and man, is it ever fun.

We went to a community Christmas party where they not only brought in Santa Claus (Kitty loves the Claus in theory, not reality. No photo ops with Santa this year. She kept telling the kids behind her 'Its your turn'. ) but ponies (Kitty is seriously horse crazy), a train, bouncy castles and the mother of all wonders for kids raised in the subtropics- SNOW!! 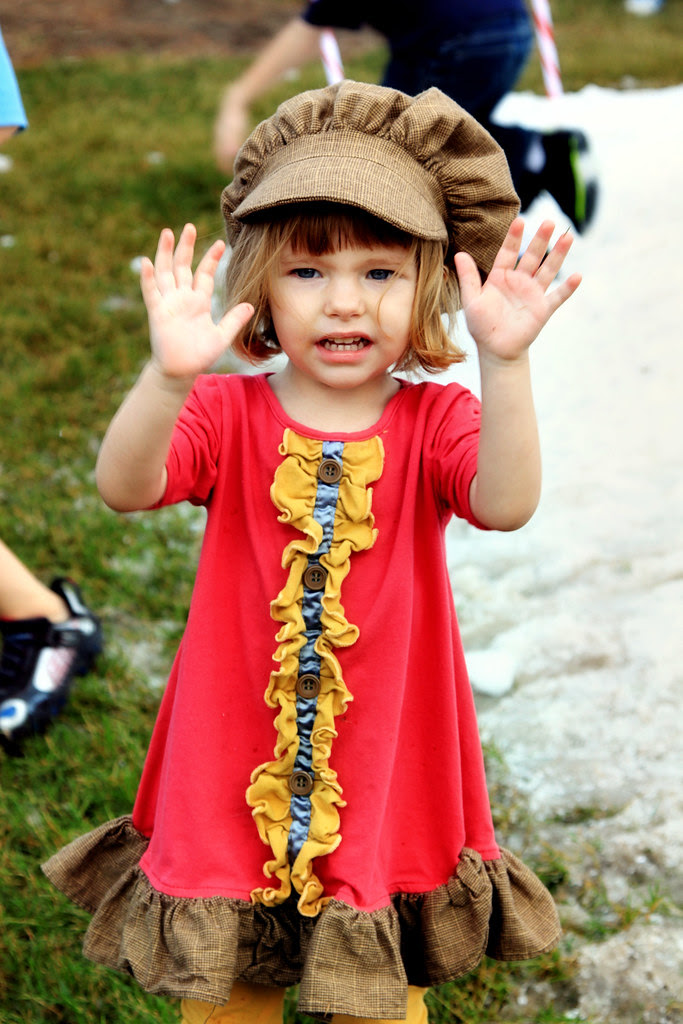 Kitty could not wait to throw herself into the snow. Once she did, she learned the hard, cold truth. (pun intended) Snow is damned cold. She turned around holding her hands up "Mama. I need glubs".

Maura was excited by the snow until she realized that snow in 75 degree weather turns to ice and that stuff is slick. She looked like a geriatric tottering around on the ice but is wily enough to have plucked a candy cane decoration that was the perfect size to function as a walking cane and enjoyed the ice until her feet were too cold and then it was time for home. Who needs Disney World? 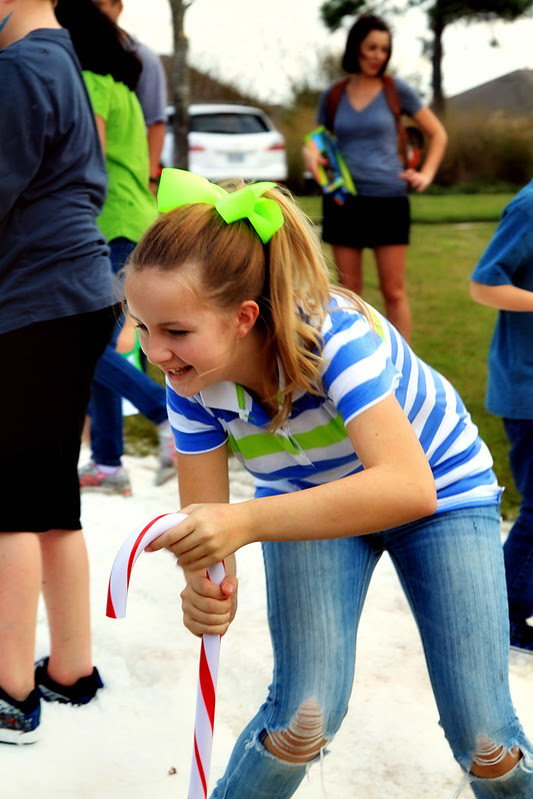 While Mark was off traveling the world for fun and profit, Maura and I got to work on a fun little project. My dear friend Steve Rees, formerly of Two O'Clock Courage was kind enough to record a little piece of Christmas music for Maura to sing. Steve is an incredibly tasty guitar player and I love what he did for her. We didn't tell him anything other than "Do your thing"and boy did he come up with a lovely arrangement for her. He's not only a fantastic musician, he has a place in his heart for young musicians. I think he was the perfect conspirator to work with Maura on her first ever recording.

Cindy Pruitt of Smiley Face Records was a gem to work with as well. Even going into a small studio, doing a quick and easy vocal take without any bells and whistles or studio magic can be daunting to an inexperienced singer. Cindy was very warm, welcoming and put no pressure on Maura. I think Maura had a really great first studio experience which will serve her well when she is grown should she continue to want to sing. Thanks again to Cindy and Steve. We really place a high value on experiences over things and this was a great experience for her.

So here is Maura singing a song of the season with highlights of the past year. We wish you all a very Merry Christmas and a blessed New Year. May this next year find you an abundance of laughter, joy, health, adventure and a great big horizon.


* When Mark heard this his comments where "ACK! It sounds so ENGLISH! Why did you pick something so slow and without a beat?!?! Because Mark, 'God Rest ye Merry Gentlemen' is my dad's favorite Christmas song and my dad is my number one Daddyo and since he is the bees knees, he gets his granddaughter singing his favorite.

Not to worry. Kitty shares your love of hard rocking Christmas music as evidenced here:


That's right. That's my baby singing The Kinks. That is how we roll. Merry Christmas everyone.
Posted by The Ceol Mors at 5:41 PM 9 comments:

Props to the Liveaboard Refitters

Some folks make sailing heroes out of those who sail the higher latitudes dodging icebergs and dealing with extreme weather.  Not me. Why anyone would want to sail in frigid waters with the only reward at landfall being some seals barking at you, penguin poop and yet more frostbite?

No, my sailing heroes are the folks who manage to live aboard while undergoing a real refit. And by real I mean something a little more involved than changing the curtains and adding new electronics. That's not a refit, that's shopping despite what the boat brokers try to tell you. Living in an already really confined space with everything topsy turvy and managing to not fly into a homicidal rage? That is worthy of admiration. I respect those who do this because there is no way I could do it.

Here is the current state of our salon. All the floorboards are up, Bondo fumes fill the air, the headliner is still off and tools are everywhere. Though heaven help you if you move the tools because Mark has them placed just SO. 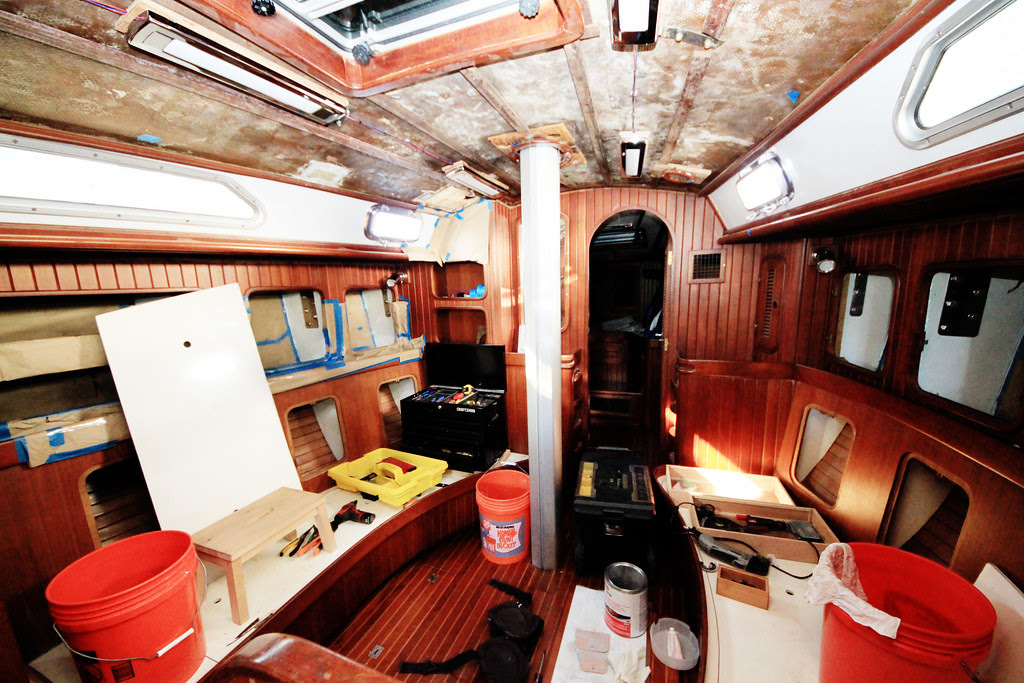 The reason for this latest bit of upheaval? Tidying up the run to the bilge. The area under the floorboards has never been faired which means we have lots of little bumps and crevices along the way to the bilge. Bumps and crevices which like to hold water (which despite our best efforts continues to drip down the mast). Sure, its a tiny bit of moisture but its a small boat and that little bit of moisture does like to grow interesting things like mold and mildew. Our goal is to make the boat as dry as possible so we need any and all water to go all the way down to the bilge where we hope one of the numerous bilge pumps we are putting it can give it back to the ocean. 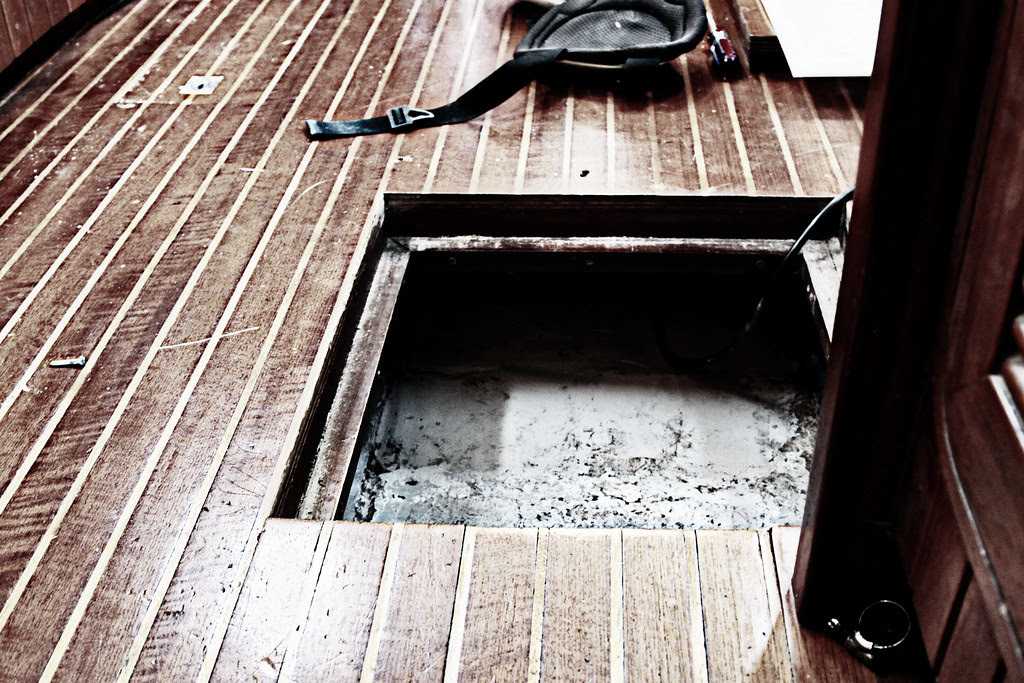 We would also like to be able to install sliding trays which run on elevated tracks in this unused space. Not a whole lot of things will fit there, but provisions sealed in airtight containers should fit. We will have enough canned good storage space to provision for the zombie apocalypse. That's the thing about zombies, everyone knows they can't swim so a boat is a perfect place to avoid brain stealing walking dead. That was my first thought when Mark and I discussed adding storage. Mark just raised an eyebrow at my fantastical rabbit chasing mind. He can be really patient at times. But I digress... 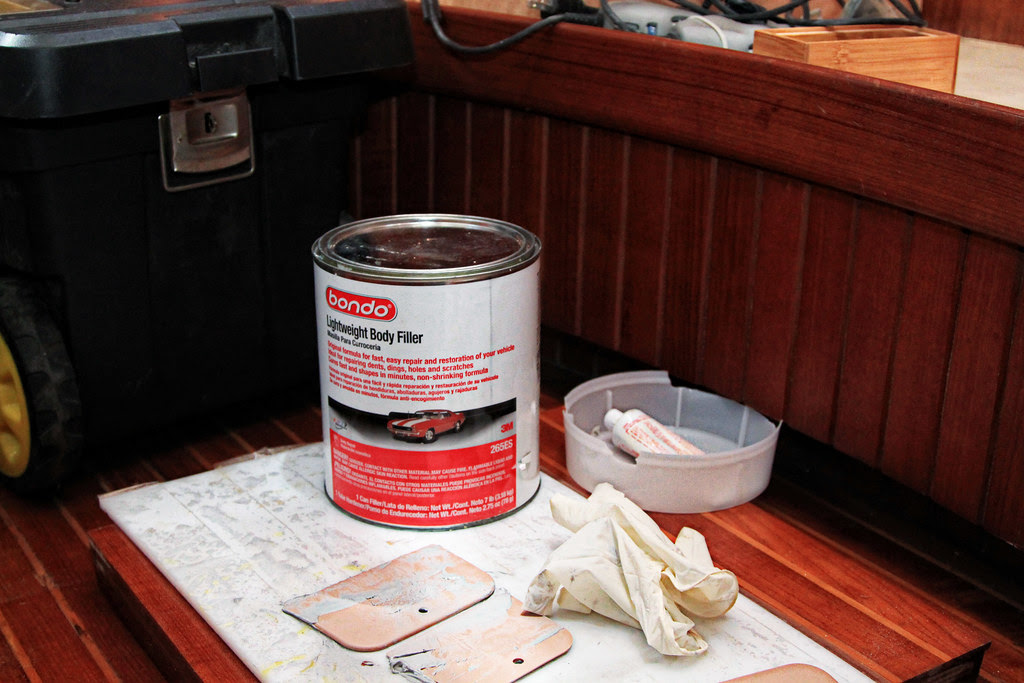 So we endure the smell of Bondo as we try to make the under floor area baby butt smooth. The fumes tend to make me lightheaded, then I start to like the smell and wonder why no one has come up with a Bondo scented aftershave because is it ever a MANLY smell and then I realize I am obviously destroying the few brain cells I have and I'd better go on deck for a fresh oxygen infusion. When my thinking process returns to normal (or as close as mine ever gets) I then think about the folks who are doing similar tasks on their boat while living aboard and I am in awe of their fortitude. THAT is some serious chutzpah. 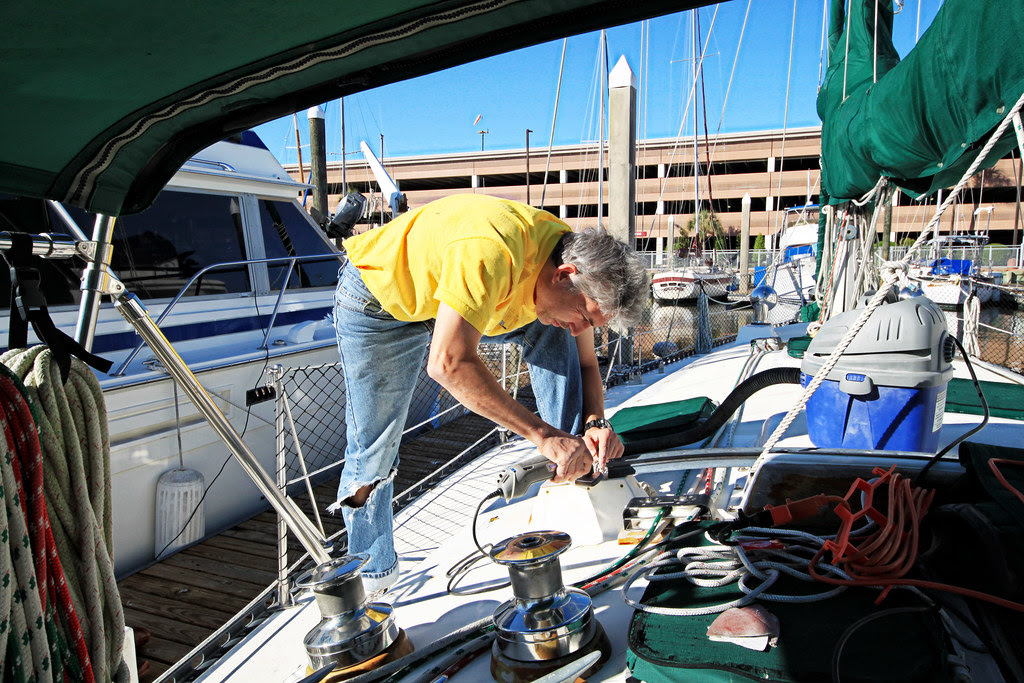 What do we do while we wait for the Bondo to cure? Why tidy up the topsides of course. We are still pondering what we want to do to the deck layout to make Ceol Mor easier to sail but we know all the decks need to be in tip top shape before we install anything so while we think, we tidy. We tidy up which means there is every bit as big a mess on deck as there is below.  Gingerly step around the needed tools and gently remove any yuck staining the fiberglass under the old deck hardware, check for soundness and paint as necessary. Repeat. Go below, brave the fumes and clutter and Bondo some more. Then be very thankful we don't have to try to live in this big mess and give a hearty salute to those brave souls who chose to do so. You folks are made of stern stuff indeed.