Highs and Lows of Marine Retailers.

I have been holding out on you for purely selfish reasons. I waited to tell you about the best darned marine book selection until I found the last book I really, really wanted. Yes, West Marine will carry a few books and you can always order books online but if you are like me and kind of enjoy hunting for a bargain then these options will not satisfy as much as hunting and gathering in person. Maybe its a girl thing, this need to seek and find an object and bring it home. 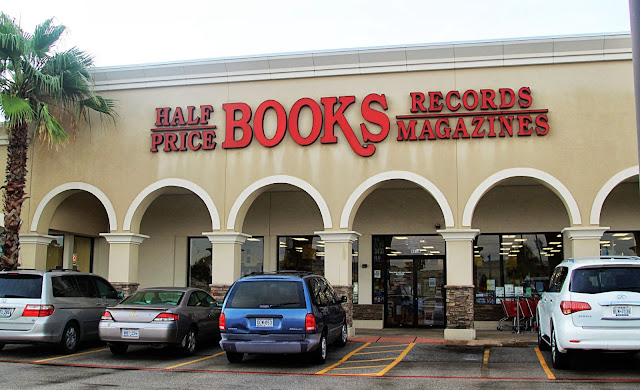 The best darned marine book selection ever is at the Half Price Books store in Clear Lake. While they don't get everything in stock and you do have to be willing to wait and to dig a bit, the selection of sailing related books at bargain prices is pretty darned amazing. While they say that the books will be sold at half off the retail price, they run sales fairly often. So often that I've picked up excellent books- both helpful and just entertaining such as Chapman's Piloting brand new for around $8.00, The Motion of the Ocean for about $6.00, Nigel Calder's Cruising Handbook for around $20 and so many others. (I've included links for those impatient folks who just want to order them, will happily pay shipping and get on with it.) 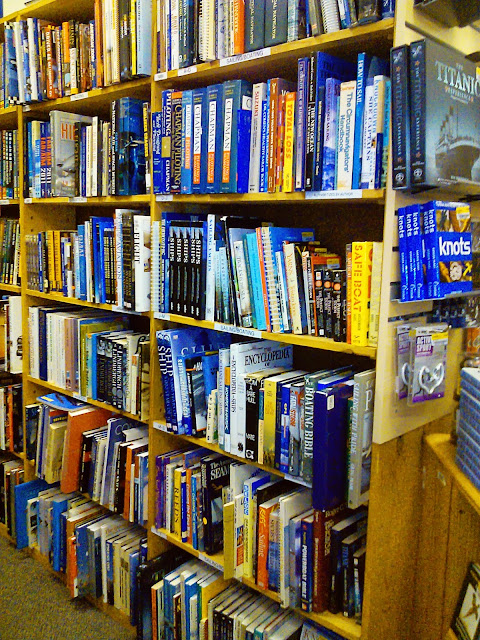 The one, last book that I have been searching for for literally months finally appeared, I snapped it up happily and paid around $16 plus tax. I scored what I consider to be the best overall, comprehensive book for  long distance sailors- Beth Leonard's Voyager's Handbook.  Yes, I know that time and money I spent on gas searching for it is probably greater than the shipping costs from Amazon but again, thrill of the chase. Girl Thing. Move on.

HPB only had one copy and its now mine and since I no longer have any books I feel like I need to have, I can tell you about the treasure trove that is Half Price Books. Seriously, a really great selection of books that is ever changing and at great prices. A bigger selection than I have seen even at dedicated marine stores.I have to ding Half Price a little though because I think every great book store must have a cat in residence. They used to have a cat but he has not been seen in a year or two. No cat, no 5 stars from me so if you want to get bumped back up to 5 star status get a cat. Preferably a really fat orange one who likes to lounge on the sales counter and really doesn't like anyone but stoically endures everyone lavishing him with praise and affection.

And now for the latest round of marine retail low points. I try to keep my complaints to a minimum but sometimes I get overwhelmed by the sheer lack of business savvy displayed by marine suppliers. I guess maybe they figure since the customer doesn't exactly have a ton of choices that they can strive for mediocrity and we will all just suck it up because again, how many choices do you actually have?

My nominee for the Marketing Genius of the year award goes to Porta-Bote. Mark and I wrestle with what dinghy to purchase and after speaking with folks who have lived with one, seeing them in person at the Annapolis Boat show almost 2 years ago we thought this was the way for us to go. It wouldn't be ideal, but it would allow us to skip davits which we really want to do and if we decided later we needed an inflatable, well those are available pretty much anywhere you find boats. Porta-Botes aren't perfect, but they are tough as nails, easy to stow and have many other attractive attributes but there are some trade offs that are less than desirable.

Then I saw the Porta Bote Crib and low, it appeared that all of the drawbacks I thought we would have to accept would be just washed away. This could be the answer for us! I in my naivete, contacted Porta Bote telling them that I had gotten the information on the Porta Bote, had seen it in person but was really interested in the Porta Crib and could they send me the pricing information and would they have one at the Houston show they would be attending?

Now, I am not going to point out that a company that has sold over 90,000 boats should be able to hire a web designer to put together a real web page that does not look it was originally hosted on Geocities. What I am going to point out is how desperately they need to hire someone with some kind of marketing background. Any Girl Scout who  has served as a cookie pusher would do a better job. When Porta Bote replied to me, they promised to send me the information I requested. They then went on to tell me that no, they would NOT be bringing a CRIB to the Houston Boat Show because IT IS OVER 3 TIMES THE COST OF THE PORTA BOAT AND AT $6000 ITS TOO EXPENSIVE TO BRING TO A BOAT SHOW.

What kind of intellectual giants are they employing? Anyone with even the tiniest bit of marketing savvy would understand that if you are offering a product that is much more expensive than your usual offerings you probably want to, I don't know let people see why its more expensive and to be able to show the value. I could be wrong...no. I am not wrong. People wonder why they don't see more Porta Botes out and about and I think we have the answer. No one there has a clue about marketing.

Oh and when I finally got my information package in the mail it contained the price list for the Porta Bote, which I had explained I already had but absolutely zero information or pricing for the CRIB. So now I have to rethink the whole dinghy option because I am seriously wondering if perhaps they are just too dense to do business with.

So, I am off to go do yet more dinghy research and yacht tender navel gazing. I still think the Portland Pudgy is pretty darned nifty...if only it were just a little bit bigger. *sigh*

Maura has indulged in the American teen rite of passage of running around with friends, swimming and catching up on all the tv she missed during the school year. Kitty enjoys the summer rite of passage of dancing in the sprinklers as they make a vain attempt to keep the green stuff from turning a crispy brown. Sailors have rites of passage too. The first rite of passage is for your surveyor, no matter how good and how thorough to miss something big on your pre-purchase survey. This will be monumentally time consuming, or expensive or both. Happens to everyone. Expensive miss? Check.

Then there is the first time overnight at anchor when you hear the weird bacon sizzling noise of tiny crustaceans doing god knows what around your hull.Check. Running aground. Check. Ripping a sail. Check. Anchor refusing to set/dragging. Check. See? These are all rites of passage that everyone who sails will encounter eventually. We are no more cursed or blessed than anyone else. I just figure its all part of it and make a check list to count down the inevitable.

With the heat coming on gang busters, we had the opportunity to experience yet another rite of passage. In order to keep the refit moving forward, it is an absolute necessity to run the ac while sitting in a windless marina. An ac that requires an intake through hull. An intake through hull that will eventually, suck up some poor unsuspecting sea creature to its demise. I was hoping we would get a squid because they tend to be squishy and a little easier to extract but no. Our sea creature is of course an over achiever so what did we get? A big, fat  fish. That sucker was seriously wedged in there. 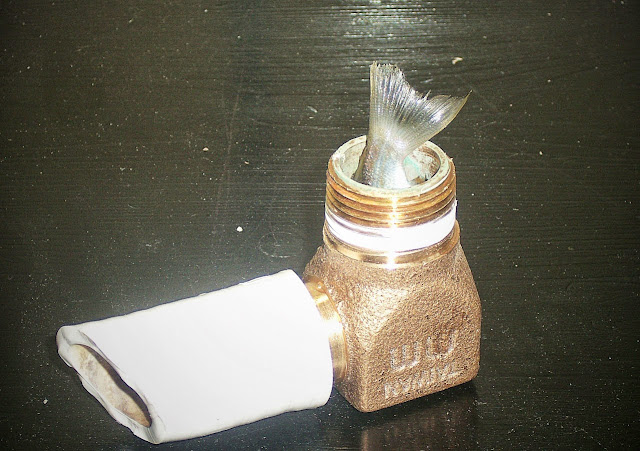 Mark tried everything he could to get the fish out without resorting to cutting the lines. He tried working on it from the outside, the inside, from every conceivable angle but in the end- due to a 90 degree angle, the lines had to be cut in order to remove the now very dead fish. Mark was annoyed that the intake was designed in such a way that he could not rod out the intake. You know what that means. he is busy redesigning the intake/strainer set up to avoid this. Ceol Mor will be getting a completely redesigned ac system that will allow rodding of any and all through hulls.

Refit project list expanding project by project despite your best efforts to whittle it down? Check.
Posted by The Ceol Mors at 1:59 PM 3 comments:

Kitty's most recent frustration was do to her desire build a drum kit which kept slipping on the slick table causing her to drop her groove. Some days, we feel exactly the same way kid.

My most recent frustrations were due to the wind picking up after being dead calm as I laid out painted panels to dry and my never ending on going battle with my sewing machine which I am pretty convinced is intelligent, cognizant  and for some reason is very, very angry with me. Mark's frustration of the day (he gets daily ones) is the routing of hot and cold pressurized water lines.

It seems the industry standard for plumbing runs is to just shove the hose in any available space and call it good. Since we want to maximize the space in the boat, keeping everything tidy so we can utilize every single centimeter of space and since Mark is Captain Perfecto and therefore can not sleep until he manages to execute a complete redesign of all the systems to a level of perfection never before seen except on nuclear class subs, its slow going. Just planning out and beginning the install of the hot and cold pressurized lines ate up a good 2 days and its still ongoing.

Our pace is also slowing down a bit due to the heat. Whether you call it 32c or 94f its essentially the same thing. Freaking hot and its only going to get worse.In a vain attempt to keep the boat at a tolerable level while we work, we have installed our awesome boom tent. By awesome, I mean completely Red Neck fabulous. I would love to have one of these Ronstan Air Arch or one of these Shade Tree but at around $700 for either of them, our $50 TP version starts to look really good. If I just can learn to play Dueling Banjos on the banjo, I think I can convince the marina neighbors its a stylistic themed choice. All we lack are old tires for fenders and an old green sofa on the foredeck and we are good to go. 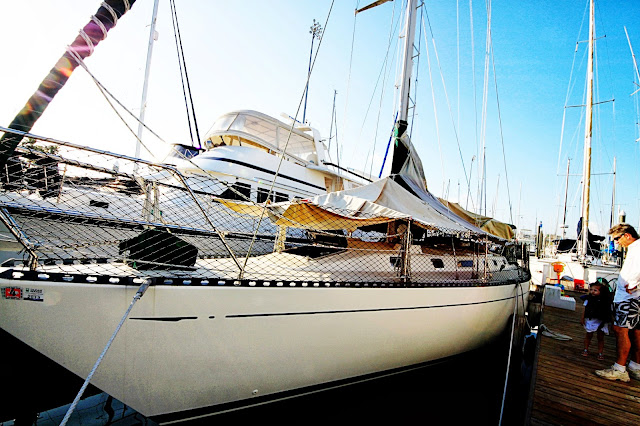 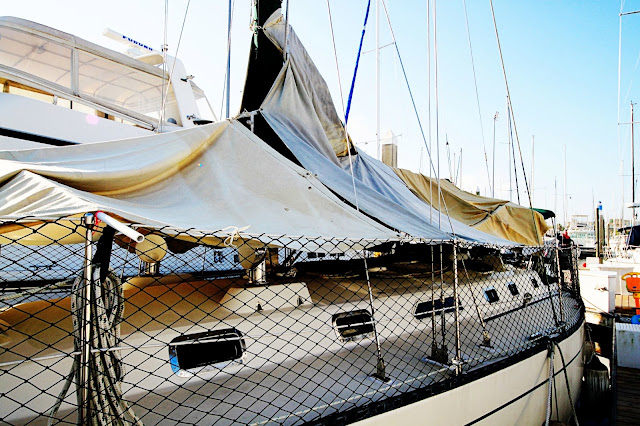 In other news of progress, the "varnish lady" has been hard at work applying the varnish to the new teak and holly sole in the master cabin. Due to that particular piece of mill work being on the spendy side, we opted to hire someone who does varnish every single day to finish it. Mark will let me varnish exterior stuff because it doesn't matter how perfect or imperfect it is, you are going to have to redo it sooner rather than later anyway but interior stuff requiring a bit more control and finesse? Best to hire it out. I figure I will post a photo when its done, instead of taking shot after shot as each layer is applied. That would be sort of like watching paint dry. No actually, it would be EXACTLY like watching paint dry.
Posted by The Ceol Mors at 1:12 PM 6 comments: