One of Mark's favorite dock buddies is Salty Gene. His name is actually just Gene but we've benefited so much from his knowledge gained during his 6+ years spent cruising the Caribbean on the boat he built himself, his years sailing the US and added with the fact that he manages to wear a fisherman's hat without looking the least bit twee that I feel calling him Salty Gene just fits better. And this is my blog so there ya go...Salty Gene it is.

Anyway, we had the opportunity to take the boat out with Salty Gene aboard to get an idea of what we want to add and more importantly, where the screw ups on the deck lay out and running rigging are so we can address them while we refit. We had plenty of wind at around 20-22 knots. Enough that we were able to get moving along at a well heeled over clip even though our main sail is the more akin to a sleeping bag then a sail. We managed to lose a batten due to me not tying up the end well. Fortunately, with such a  badly blown out sail I don't think a batten or the lack there of would make any difference at all. Mark asked me if I felt humbled by the loss of our batten due to my mistake. I told him no, I did not feel humbled because in order to feel humbled I had to first be feeling a bit superior about my skills. I just assume all the time that I will bumble my way through ignorance, make lots of mistakes but get through it all somehow. Besides, all the other battens remained intact so I must have done some of them correctly.

It was a very good sail. The suggestions Salty Gene made were for the most part already on our list so at least we got confirmation that we are on the right track. We also had it illustrated to us just how crappy the deck layout is. Mark has been thinking things out carefully and this should be the next big project once we tidy up the plumbing. Rigid boom vang, jammers, increasing the size of winches, new clutches, organizers, etc should keep us busy for a while as the current configuration has been declared to be "Crap. Absolute crap" by Mark and after getting the jib sheets hung up on various parts of the rigging, me cranking a winch for a heck of a lot longer than I would like to, dealing with far too much friction on the lines. etc I have to agree. Salty Gene agreed that our current set up "is too damned hard". So we are going to do what we need to make it easy because I am all about easy.( Mark, I say if you really want those 54 winches by all means go for it!)

Salty Gene declared the boat to be a good, solid and dependable sailor. We know a bit more about what we want to do to the boat especially  for when sailing with a bit of wind. The sun was shining, the girls were happy and all in all I have to say it was a very good day. After we got the boat docked and tucked away, it was time for some birthday cake (Kitty is 2!) and to make plans for some overnight sails this summer. 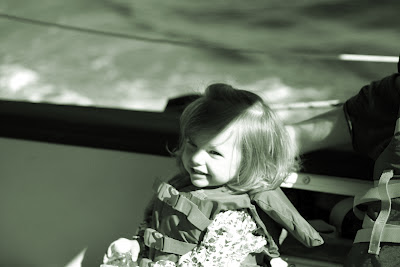 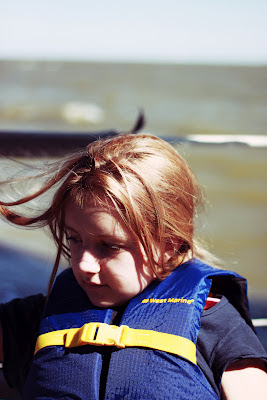